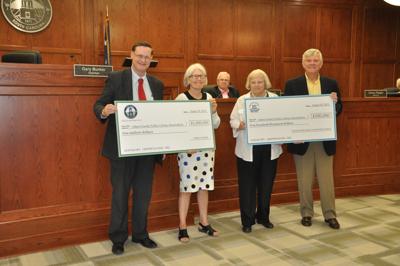 Aiken County Council responded enthusiastically Tuesday night to a proposal for the establishment of a public-private sector partnership that could generate up to $3 million to fund a major renovation of the Aiken County Public Library.

He said the Friends would provide $1 for every $2 the county contributes from Capital Project Sales Tax, or CPST, funds.

In addition, Reynolds told County Council, the Friends are prepared to invest up to $1 million if the county will contribute $2 million.

CPST IV, which was approved by the county’s voters last November, includes $1 million in funding for the public library.

In addition, County Council Chairman Gary Bunker said there was money still remaining from CPST II that could be used.

The public library has been at its current location on Chesterfield Street South since 1990.

The brick structure where it is located formerly was a school building.

“The library, which has over 150,000 users each year, has done the best it can with the funds it has received,” Reynolds said. “But it is much like it was nearly 30 years ago with few improvements… Our library has not kept pace with the world around it.”

Other members of the Friends, Aiken-Bamberg-Barnwell-Edgefield Regional Library System Director Mary Jo Dawson and Pat Helms, chairperson of the Public Library’s Board of Trustees, also attended the meeting.

County Council didn’t take any official action on the proposal Tuesday evening. But Bunker did discuss a way to move forward to approve and formalize a partnership.

The county won’t begin receiving CPST IV funds “until around the new year,” Bunker said. “But in the meantime, we will develop a memorandum of the understanding with the Friends of the Library that would need to be passed by resolution by the County Council.”

In addition, Bunker thanked Reynolds and the Friends “for this incredibly generous offer.

“It is very rare we have a roomful of people who want to give the county money as opposed to the opposite direction, so this is fabulous,” Bunker added.

County Council Vice Chairman Andrew Siders of District 7 told Reynolds, “I think we can definitely come together, and I’m really happy that there is a public-private partnership that has been proposed here.”

Councilman Willar Hightower of District 8 said he liked “very much” the Friends’ commitment to keeping the public library “in an architecturally and historically significant building.”

Councilwoman Kathy Rawls of District 1 also expressed a positive opinion about the Friends’ desire to preserve the structure.

Councilwoman Camille Furgiuele of District 2 said the Friends’ generosity “is appreciated by each citizen of Aiken County.” She also praised the organization for its “passion for the library.”

All nine members of County Council were present at the meeting.

In another matter, the panel unanimously approved the third and final reading of an ordinance that will dissolve the Aiken County Animal Control Advisory Committee.

Nobody spoke against it.

​Dede Biles is the Aiken County government, business and horse industry reporter for the Aiken Standard. Follow her on Twitter @DBethBiles.