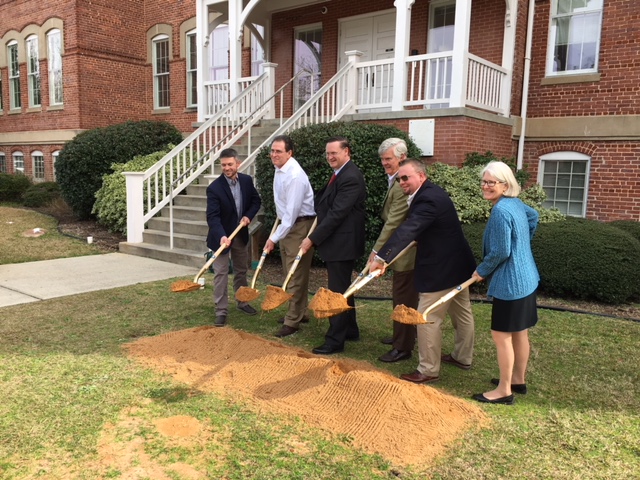 A groundbreaking ceremony on Friday celebrated the launch of the first phase of a major renovation project at the Aiken County Public Library and the public-private sector partnership that is funding the refurbishment.
“This is culmination of a process that started back last September with a memorandum of understanding signed by Aiken County and the Friends of the Aiken County Public Library,” Aiken County Council Chairman Gary Bunker told the small crowd that gathered in front of the facility on Chesterfield Street South in Aiken for the event.
Under the agreement, the Friends of the Library will provide $1 for every $2 the county contributes from Capital Project Sales Tax funds.
“It is a tremendously unique program,” Bunker said, and it could generate up to $3 million to modernize and improve the local repository for books and other materials.
“Great communities like Aiken deserve a great library,” said Friends of the Library President Bill Reynolds after he, Bunker and others posed for photos while using special shovels with gold blades to scoop up and toss some sand.
During the first phase of the renovation, the library’s front steps – considered by many to be treacherous – will be demolished and replaced with a safer stairway.
J.E. Stewart Builders Inc. of Aiken will do the work while following a design prepared by the McMillan Pazdan Smith architecture firm, which is based in Greenville.
The first phase’s cost will be approximately $165,000, Reynolds said, and the Friends of the Library will be paying for it.
Stewart Builders is scheduled to begin tearing down the steps Jan. 22. The replacement stairway is expected to be ready for use by library patrons by early April.
“There will be lower risers and longer (deeper) treads, so the stairs will be a lot gentler and safer,” said Barbara Price of McMillan Pazdan Smith. “There will be bricks on the risers and slate on the treads. It (the staircase) is going to have powder-coated metal railings, and there will be a landing midway (between the top and the bottom). They (the steps) also will be in compliance with the building code. They aren’t now, and they are dangerous.”
The width of the new staircase will be the same at the top as it is now, but it will “flare out” and be wider than it is currently at the bottom, Price said.
Originally, the plan for the first phase also called for making the library’s rear entrance, where an elevator is located, safer and more accessible.
But that has changed.
“There was so much public input asking for an elevator at the front of the building that we are going to spend the money that we would have spent on the back to install a front elevator,” Reynolds said. “We are having structural engineers look at it right now to make sure it is feasible.”
During phase two of the library renovation project, the interiors of the first and second floors will be modernized.
It will probably be “six or eight months” before the work on the library’s interior starts, Reynolds said. “The plans are being drawn up, and we’re going to have to bid that out.”
The library has been at is current location since 1990.
Its home is a brick structure that formerly served as a school building.
The first wing of the structure was completed in 1891, and the second wing was added in 1913.
The library is based in the building’s south wing. The north wing is vacant.
Speakers during Friday’s groundbreaking ceremony in addition to Reynolds and Bunker were County Council Vice Chairman Andrew Siders and Mary Jo Dawson, director of the Aiken-Bamberg-Barnwell-Edgefield Regional Library System.
“We are taking something old and making it new,” Siders said. “I am proud of this partnership, and I am proud of the hard work that everybody has put into this project.”
Said Dawson, “When we reach the end of this journey, we will have an updated and accessible library facility where the community can gather for lifelong learning and recreation.”
Dede Biles is the Aiken County government, business and horse industry reporter for the Aiken Standard. Follow her on Twitter @DBethBiles.